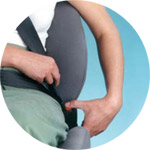 571 motorists were caught using their mobile phones whilst behind the wheel during the 2015 All-Wales Anti-Mobile Phone While Driving Campaign.

The enforcement campaign, which ran between September 24 and October 7, involved road safety partners and urged all road users to ‘keep their eyes on the road’ and not be distracted by answering their mobile phone, reading a text or going online.

Studies show that drivers using a hands-free or handheld mobile phone are slower at recognising and reacting to hazards.

Driving for Work: Mobile PhonesAs a result of this, RoSPA Wales have produced their first in a series of ‘Driving for Work’ factsheets to help employers manage the risk for staff who use the roads as part of their job. This first edition focuses on the dangers and consequences of driving while using a mobile phone.

You are four times more likely to crash, injuring or killing yourself and/or other people, if you use a mobile phone while driving, whatever you’re doing with it.

Police Launch Campaign Targeting Motorists Who Use Phones Whilst Driving

The four police forces in Wales, led by Dyfed-Powys Police and in partnership with Road Safety Wales, are launching a major crackdown on motorists who use mobile phones whilst driving. The All Wales enforcement campaign will run from Thursday September 24 to Wednesday October 7, and is urging all road users to ‘keep their eyes on the road’ and not be distracted by answering their mobile phone, reading a text or going online.

Police patrols will increase across Wales for the duration of the enforcement campaign, to draw drivers attention to not only the risks posed by being distracted by mobile phones while in control of a vehicle, but the serious penalties which they will face if they are caught.

Nationally, the numbers of motorists using mobile phones to make calls, texts or social media updates whilst driving has risen and distracted driving is expected to be the biggest single cause of death and injuries on roads as a result in 2015. In Wales more than 900 motorists were caught using their mobile phones whilst behind the wheel during the 2014 campaign.

Over 12,000 Breath Tests Carried Out Across Wales During Summer Anti-Drink/Drug Drive Campaign

Over 350 breath tests were positive throughout Wales during the recent month-long Anti Drink and Drug Drive Summer Campaign. The campaign, which was led by North Wales Police, saw officers carrying out over 12,000 breath tests and 52 arrests were made under the new Section 5a drug drive offence which came into being on March 4th 2015, giving officers the ability to test for cannabis and cocaine use.

North Wales Police administered 5,235 breath tests with 85 being positive. The force also carried out 20 DrugWipe tests, using the new kit, half of those tested failed.

Gwent Police carried out 297 breath tests with 17 testing positive, refusing or failing to provide. 19 people were arrested following a Section 5a drug test.

Keep Drink and Drugs Off The Road This Summer

With summer just around the corner and the prospect of parties around the barbecue in the long evenings, police across Wales are warning motorists that officers will be on heightened alert to spot anyone driving under the influence of drink or drugs.

Led by North Wales Police, the month-long All Wales Summer Anti Drink and Drug Drive Campaign throughout June, will see all four Welsh police forces increase the pressure and focus on those drivers who drink and drive or drive under the influence of drugs.

Sergeant Alun Davies from North Wales Police’ Roads Policing Unit said: “We all enjoy the prospect of longer evenings and the possibilities they present for socialising in homes, gardens, local pubs, festivals and other events.

“Switch off before you drive off” – that is the message being given by North Wales Police’ Roads Policing Unit as they launch a two-week distraction campaign.

Officers from the specialist unit are teaming up with colleagues from across the force to launch a campaign targeting people who use their mobile phones whilst driving.

As well as imposing penalties on drivers who are caught, dedicated officers will also use the campaign as an opportunity to educate motorists of the dangers of distraction driving.