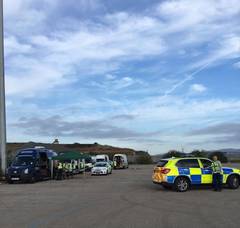 Officers in Newport held an operation yesterday targeting travelling criminality. During the operation, 53 vehicles were stopped.

Inspector Matthew Havard said: "We want to send a strong message to anyone intent on criminality in our communities, that this will not be tolerated. More operations are planned for the future, so be warned, we will be waiting!"