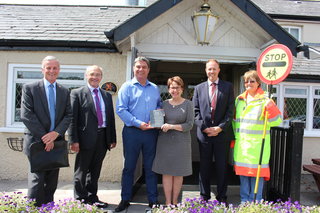 This arrangement soon saw the problems posed by the traffic reduced and, in 2007, the arrangement was further improved when a school crossing patrol site was established outside the Three Horseshoes Public House, providing a pedestrian crossing point. This proved to be the final link in creating a safe walking route between the Three Horseshoes’ car park and the school, but could only be retained whilst permission to use the car park was sustained.

Cllr. Peter King, Vale of Glamorgan Cabinet Member, and Cllr. Rhodri Traherne, the local ward member for Peterston Super Ely, were on hand to show their appreciation, with Cllr. King saying of the award: ‘This has proven to be a magnanimous gesture by Jenny and Digby Rees, one that has markedly improved the congestion in the area. It is a great privilege to have been able to award this Road Safety Award to them, as they have contributed not only to road safety, but to community spirit in Peterston Super Ely.’