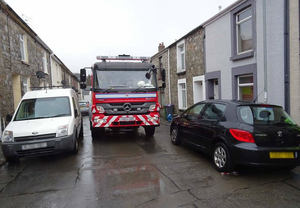 Did you know that a fire appliance is 2.8m wide and 7.5m long? That is the equivalent of a HGV lorry trying to get passed. Station Commander for Blaenavon and Cwmbran, Tony Jackson said, "We work closely with partners and members of the public in our local communities to ensure that we all stay safe on our roads and this includes parking. However, with the number of cars on local streets, there have been access for our crews when attending incidents.

"If local residents could think about the room they leave when parking their vehicle, which includes parking on a bend or corner, it just means that this reduces the risk of damage to their vehicle due to emergency services having to squeeze through or that we are delayed in attending an emergency which puts lives at risk."