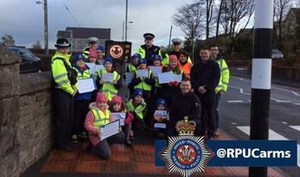 Some 88 motorists were found to be exceeding the 20mph speed limit outside a Carmarthenshire school during a recent week-long road safety campaign. The joint Road Safety Partnership campaign was held outside Llechyfedach School, Upper Tumble from 11-15 January.

The campaign was run by Carmarthenshire Roads Policing Unit, GoSafe Safety Camera Partnership and Cross Hands Neighbourhood Policing Team, who spent the week outside the school at key times. Officers provided a visible presence outside the school and carried out preventative measures along with enforcement and education to motorists.

Carmarthenshire Roads Policing Sergeant Ian Price said: “This was a successful operation focussing on casualty reduction where road safety issues were dealt with positively providing the community and parents with confidence that school children of the area can walk to and from school safer in the knowledge that positive action has been taken to educate motorists. Similar campaigns are planned within Carmarthenshire over the next few weeks.”

The activity was carried out following community concerns at results of a recent survey from Carmarthenshire County Council, which showed motorists were ignoring the 20mph speed restriction. Some 85 per cent of motorists were found to be driving in excess of 30mph. These speeds were recorded during peak times when children were starting and finishing school.