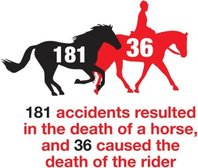 In the five years since the launch of its horse accidents website, over 2,000* reports of road incidents involving horses have been reported to the charity. Of these, 36 caused rider deaths, and 181 resulted in a horse dying from their injuries or being put to sleep.

75% of accidents happened because the vehicle passed the horse without allowing enough space, while over a quarter of respondents said that they also had to deal with driver road rage during the incident.

The majority of these incidents happened on a minor road and in a rural area. Nearly half of the horses involved were used to riding on the roads more than once a week.

Since the launch of the BHS horse accidents website in November 2010:

90% of respondents were female

The launch of the campaign, Dead Slow, follows a number of high profile petitions calling for greater protection for horse and rider on the roads following the injury of horse carriage master Mark Evans and the death of his horse Wil, who was hit by a car in Wales last month as he pulled a funeral cortege.

Lee Hackett, BHS Director of Policy, said: “We are asking drivers to slow down to 15mph when they see a horse on the road. A lot of people aren’t sure how to safely pass a horse when driving, and so we have produced a video showing exactly how it should be done.

It's worth remembering that these statistics are just the accidents reported to us, there will be countless others. Almost everyone who rides horses can recount a story about a time they had a near miss on the roads.

We are campaigning for legislative change, but that can take a long time. That is why we are asking for this instant change in behaviour from drivers.

The British Horse Society has produced a video demonstrating how to safely pass a horse on the road. The charity will also be asking equestrians to ensure that they thank any drivers who pass them responsibly.

Kevin Clinton, Head of Road Safety at the Royal Society for the Prevention of Accidents, said: “Horses are large, powerful animals and they can easily panic and bolt if startled. This is dangerous for the horse, the rider and other road users. All drivers should be aware that they may come across horse riders at any time, especially in rural areas. If you see one, slow right down as you approach and pass it slowly and smoothly, without revving your engine or sounding your horn. If there’s not room to pass it safely, wait until there is.”

Horse accidents can be reported to the BHS via the website: www.horseaccidents.org.uk