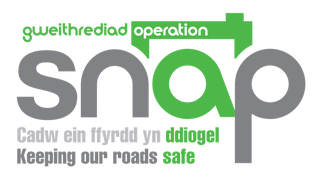 The joint initiative between the four Welsh police forces, GoSafe and the Crown Prosecution Service, has attracted support from Cycling UK and The British Horse Society as well as a number of families who have lost loved ones as the result of a road traffic offence.

Among them is Alison Jones, whose 77-year-old uncle David Howells was killed as he crossed a road on Black Friday in 2016. The driver of the vehicle was later convicted of driving without due care and attention.

Mrs Jones said: “The impact of David’s death has been devastating and I want people to be aware of how their actions behind the wheel can ruin families’ lives. How just rushing to work or getting in the car and using your mobile phone can have such a huge and lasting impact.

“For us, the fact that someone decided to take their eyes off the road, for whatever reason, took away someone we loved dearly. It was so needless and we have to live with that forever.

“Operation Snap is a wonderful campaign that will force road users to be aware, by the use of dash cam footage, of the way they are actually driving.”

South Wales Police Assistant Chief Constable, Jeremy Vaughan, said: “Operation Snap enables people to submit footage of motoring offences to all Welsh police forces, allowing us take action, change attitudes and deal with those who compromise all our safety on our roads.

“Following a trial phase, a number of improvements were made including the way in which footage can now be submitted. This is now a very simple and streamlined process.

“This provides us with the ability target those who drive dangerously and reduce the number of fatal or serious collisions that occur on our roads.

“Operation Snap is for all roads users – from pedestrians to cyclists, motorcyclists, horse riders and drivers of all vehicles.

“If you have recorded anyone driving dangerously, then you can help us by submitting your footage online. By supporting this operation you are reminding those that drive dangerously on Wales’s roads that there is nowhere to hide.”

Teresa Healy, Partnership Manager at GoSafe, added: “Operation Snap is the culmination of partners working together to respond to community needs; to deliver a solution which allows road users and the wider community to actively contribute to road safety. This operation also allows us to protect vulnerable road users, who would not otherwise have a means to submit their footage easily to the police.

“Supported by the Crown Prosecution Service, this operation acts as a deterrent to those who choose to drive dangerously. By enabling the public to submit footage we will reduce the number of serious or fatal collisions that occur on our roads.”

Inspector Steve Davies who delivered Operation Snap on behalf of South Wales Police stated, “Police officers cannot be everywhere, as much as they try, but with Operation Snap the police could be anywhere.

“The aim of this initiative is to change driver behaviour and their mind-set behind the wheel. We want drivers to ask themselves two questions: firstly, am I being recorded? and secondly, do I really want to take that chance?”