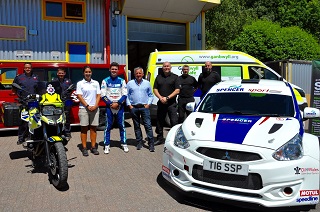 The Nicky Grist Stages has an excellent road safety and driving standards record, with no increase in road offences registered in recent years, despite the event contributing to an increase in traffic around rally route. Raising awareness of GoSafe Partnership activity in the area where the rally takes place has a positive effect, making the roads a safer place for all to be – whether it’s rally traffic or the general public going about their unrelated business. This is why the Nicky Grist Stages is keen for the GoSafe team to maintain its presence at the event, as the association is clearly working extremely well.

Teresa Ciano, Chair of Road Safety Wales and the GoSafe Partnership Manager, said: “We have worked with the Nicky Grist Stages now for five years and the vast majority of people who follow this fantastic event obey the rules of the road and drive legally – but we still want to work with the event to get the message out there that the rally is for everyone to enjoy and enjoy safely. This year we have also teamed up with the Mid & West Wales Fire and Rescue Service to promote the Fatal 5, and to raise awareness of the five main causes of collisions on the roads in Wales. One of those reasons is careless driving, and we want to encourage people to drive safely when they travel to and from the event, and between stages.

“Ultimately, we all want to go out and enjoy ourselves and not be subjected to other people driving irresponsibly. Operation SNAP has been very successful, and it’s the most effective and efficient way of reporting and dealing with motoring offences for the public.”

Nicky Grist said: “The association with GoSafe is a very important one for us at the Nicky Grist Stages, because we can emphasis to the public that we are responsible competitors, officials and spectators. Rally cars tend to be a little bit more noisy and a bit more colourful than your average car, so tend to stand out and sometimes get a little unfair attention on road sections, so this association spreads a good message for other people who are on rally route that we do drive on road sections within the speed limits and that we do obey the rules of the road. Dyfed Powys Police has always been very supportive of rallying and the Nicky Grist Stages has a long and successful relationship with the GoSafe Partnership, and we all benefit from the association.

“I’ve been very lucky to go behind the scenes and look at some of the Operation SNAP footage and I’ve been quite shocked at some of the road offences that have been committed. I drive a lot, and I’ve seen the quality of driving getting worse in recent years. Drivers who drive as badly as some of the ones I’ve seen on Operation SNAP deserve to get booked, because it’s completely irresponsible – so it’s a very good initiative. Operation SNAP will, undoubtedly, make our roads safer.”

Osian Pryce said: “It’s been an eye opener to see what the GoSafe Partnership does and the work that goes on. It’s interesting to see how much effort is going into keeping Welsh roads safe and how Operation SNAP has streamlined the way the police collect and deal with motoring offences that have been captured by motorists on dash cams. It’s not just about raising awareness to rally spectators – competitors use road sections and have to abide by the rules of the road too, and it’s been a very good reminder that speeding or driving irresponsibly is more and more likely to get you into trouble with the police. The Nicky Grist Stages is a big event, contributing to extra traffic on the roads, so it and the GoSafe Partnership go hand-in-hand and it’s a great way for rallying to help promote better, safer, driving.”

Neil Cross, Nicky Grist Stages Clerk of the Course, said: “Our relationship with GoSafe is unique within the rallying community and this is something the organisers, Quinton Motor Club, is immensely proud of. Helping to promote initiatives such as Operation SNAP shows that we take road safety very seriously, spreading the message amongst our competitors, officials and spectators alike. Taking this forward we welcome the Fire and Rescue Services and are keen to help promote the Fatal 5 initiative too.”