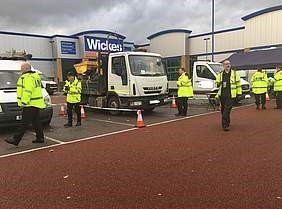 Gwent Police recently joined forces with a wide range of partner agencies in Caerphilly for the latest staging of Operation Utah, an intervention which focusses on criminals using the roads and on defective vehicles.

During the operation, which is aided by the use of Automatic Number Plate Recognition (ANPR) cameras, 56 vehicles were ushered into the Gallagher Retail Park by police officers and were checked for a variety of issues by the Driver and Vehicle Standards Agency (DVSA).

The operation results were as follows:

West Area Support Unit Inspector Wendy Keepin, who led the Operation, said, “This operation took place during a national week of action to target uninsured drivers, thousands of which injure other road users every year.”

“Working closely with Gwent Police on Operation Utah has meant that we've been able to take some unroadworthy and illegally overweight vehicles off the roads here in South East Wales.

“We urge drivers to ensure that their vehicles are roadworthy and that their licence is suitable for the vehicle they wish to drive, otherwise they risk a fine or prosecution."

Anyone with concerns about suspect vehicles or road users in Gwent can contact Gwent Police on 101, or 999 in an emergency.