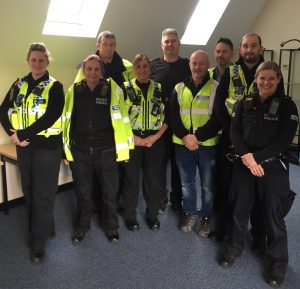 Since early 2018, residents of Radyr, Cardiff have expressed concern regarding heavy goods vehicles (HGVs) on Heol Isaf. In response to local concerns, the Fairwater Neighbourhood Policing Team has launched Operation Blue Labrador to reassure the community and deter anyone from breaking the law.

Heol Isaf is an environmental weight restricted road, meaning that HGVs over 7.5 tonnes are restricted from using this road unless they require access in order to make a delivery. The aims of Operation Blue Labrador are to enforce, educate and empower residents.

Enforcement - To commit an offence in respect of the weight restriction, the vehicle must travel the entire length of Heol Isaf without needing to stop to make a delivery at an address only accessible via Heol Isaf. The police carry out monthly checks and any vehicle found to be breaching weight restrictions is stopped and the driver is issued with a Traffic Offence Report (TOR).

In addition, every two to three months, similar checks are made with the assistance of Trading Standards and the Driver and Vehicle Standards Agency (DVSA) who have additional powers to take action upon those contravening the weight restriction.

Education - With the assistance of local councillors, haulage firms, companies and housing developers have been contacted to raise awareness of the weight restriction legislation.

Neighbourhood Policing Officers regularly meet with residents to provide information on what constitutes an offence and also when the driver might have lawful reasons to use the road.

Empowerment - Radyr is a pilot area for Community Speed Watch. Members of the Radyr Community who are passionate about protecting their village have volunteered to be trained and to give up their own time to run a Community Speedwatch, whereby they work as a team to record the speed and registrations of vehicles exceeding the speed limit on Heol Isaf. This information is provided to GoSafe who issue warning letters to the driver of the vehicle.

The police are aware that road safety is a concern for the local community and will carry out regular traffic operations across the Fairwater Policing Sector as often as possible.

In the meantime they remind all drivers to abide by road traffic laws for the safety of all road users and to avoid being fined or receiving points on their licence.