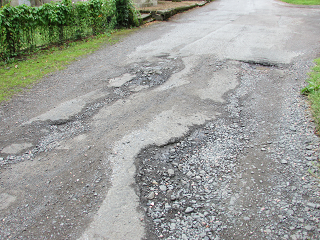 Road repair crews in Neath Port Talbot have been trialling a new pothole repair method which uses a thermoplastic based substance instead of traditional tarmac.

The Council reports that initial results suggest the use of the new material could be faster, cleaner and less expensive. Compared to traditional methods, the repair is a speedy process, no excavation is required and little to no waste is produced when works are undertaken.

A Council spokesman said, “In the trial, a total of two hundred and fifteen square metres was repaired in around two days using approximately three tonnes of material.

“If this was done with the traditional ‘excavate and reinstate’ method this would have taken considerably longer, required approximately 21 tonnes of tarmac and would have produced a similar amount of spoil waste.”

The costs of the new material are higher than traditional hot tarmac. However, in the trials carried out in Neath Port Talbot, the coverage area per tonne worked out around seven times greater, making it overall, less expensive to use. Roads and footways being repaired using the new material could be used within just 20-30 minutes of being laid.

Councillor Ted Latham, Neath Port Talbot Council’s Cabinet Member for Streetscene and Engineering said, “It’s good to see we are looking at new, quicker and hopefully less expensive methods of dealing with potholes which are major issue for all local authorities and which cause problems for our motorists, pedestrians and cyclists.”