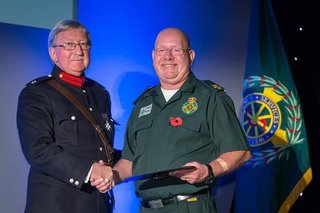 An Ambulance Service stalwart is celebrating a half-century of saving lives in North Wales.

Fifty years ago, an 18-year-old Barry Davies from Drury, Flintshire, joined the Ambulance Service inspired by a childhood in the St John Ambulance Cadets. Barry, now 68, began his career as an Ambulance Technician and has seen the organisation evolve from a small-scale local operation to Wales’ national ambulance service.

“When I look back, I feel immensely proud. It’s absolutely flown by but I have such fond memories.”

Jason Killens, Chief Executive of the Welsh Ambulance Service, said: “Fifty years is an incredible length of service and we’re so grateful and fortunate to have a colleague of long-standing like Barry.

“Barry has helped hundreds, if not thousands, of people over the years, many of whom would not be walking around Wales today if it were not for his skill and dedication.

“He’s an extraordinary man who has committed his life to making sure people are taken care of.”