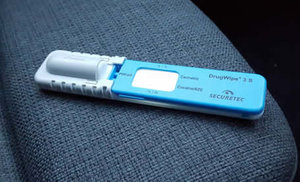 Dyfed-Powys Police has revealed that its Roads Policing Unit officers arrested 20 people on suspicion of driving while under the influence of drugs or alcohol over a three day period, Friday, 25 September -Sunday, 27 September.

Inspector for Specialist Operations Andy Williams said, “Unfortunately, we have seen a dramatic rise in arrests over the past 12 months, with the number of drug driving incidents surpassing drink driving.

“We are putting this down to increased detection rates, and the highly proactive work of our Roads Policing Unit officers across the force, who are doing all they can to ensure these dangerous drivers are taken off the road.”

Insp. Williams explained when drivers would be tested for having alcohol or drugs in their system. “There are various scenarios in which we have cause to carry out a drug swipe or breath test. We might pull a vehicle over due to the way it is being driven, if it shows on our system as having no tax or insurance, or if it has been involved in a crash.

“Officers are well attuned to the signs that a driver could be under the influence of drugs or alcohol, and closely monitor the behaviour of the driver in these situations.

“They make an assessment on whether a test is needed, and just like doing a breath test at the roadside, they can carry out a drug wipe which will give an indication within minutes that someone has an illegal substance in their system.

“If this is the case, they are taken to custody where a blood sample is taken for analysis and use in subsequent prosecutions.”

Insp. Williams issued a reminder that by driving while under the influence of drugs or alcohol, you put your own life and the lives of other road users at risk.