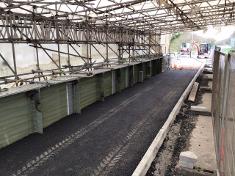 Recent speed surveys conducted by the council have shown average speeds across the bridge are well above the 30mph speed limit and motorists could be putting lives at risk if action is not taken to protect pedestrians.

Stuart Davies, Head of Highways and Transportation, said, "The route across the bridge is quite narrow and has never featured a pavement for pedestrians to walk along - forcing people to walk along the road while cars are passing, often above the safe speed limit.

"The route has become much more popular with walkers during the lockdown and we have identified a need to put measures in place that protects pedestrians.

"Now the bridge is closed, we have an opportunity to complete a scheme we are confident will lead to a safer walking route."

The ongoing work to install the pavement means the current two-way road layout will be reduced to a one lane route with traffic controls in place a part of the scheme to control vehicle movements in either direction.

Mr Davies added, "We've completed extensive traffic flow modelling of the route, taking into account future vehicle growth and motorists should not be concerned about the route becoming congested when they lights are installed.

"It's a natural reaction sometimes for motorists to not welcome traffic lights and worry about being held up in traffic queues, but we have shown with the newly configured Broadway scheme that the introduction of traffic controls have proven to be a benefit, particularly in helping pedestrians move around the busy junction."

Once completed, the council is hoping the new bridge layout will form part of a wider Active Travel route between Pontarddulais and Grovesend.