New Posters to Educate Drivers on How to Pass Horses Safely 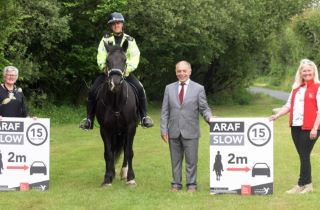 New roadside posters to educate drivers on how to pass horses safely on the road have been installed at 10 ‘hotspot’ locations across Carmarthenshire.

Horses and their riders can be vulnerable on the road; and a collision involving a horse and a vehicle can have life threatening consequences for the horse, the rider as well as the occupants of the vehicle.

According to the BHS, around 80% of incidents occur because a vehicle has passed too closely to the horse – which is unacceptable and can easily be avoided.

It is understood Carmarthenshire is the first local authority in Wales to install the posters on its roads, and it is hoped that other councils will follow suit.

The posters have been installed temporarily throughout the summer months at the following locations, as identified by the BHS incident reporting map:

If you are approaching a horse and rider, the first thing to do is reduce your speed and be prepared to stop. Make sure you keep well back and avoid revving your engine or sounding your horn.

Please be patient and give the rider time to find a gateway or another place at the side of the road where there should be enough space between the horse and your vehicle to allow you to pass safely.

If the road is wide enough and it looks as if there will be an opportunity to overtake safely, please ensure you will be able to do so without rushing – if in doubt wait for a larger gap or somewhere with even better visibility.

It is essential that all road users pass slow and wide, leaving a 2m gap and at no more than 15 mph – whether you’re driving a car, heavy goods vehicle, motorbike or a bicycle. Only once you are well past will it be appropriate to gradually build up speed again and continue your journey.

Executive Board Member for the Environment Cllr Hazel Evans said, “I am delighted we are working with the BHS on this initiative. As a rural county, it is important that drivers are aware that there are likely to be horses on the road and that they treat them with respect by not driving too fast and giving them plenty of space.

“These signs have been put up in locations which have been identified as challenging by riders, following incidents reported to the BHS website. This is an issue throughout Wales, not just in Carmarthenshire, and it would be great to see other councils join this initiative.”

The BHS is encouraging riders to report road incidents, which are often underreported, and an app has been developed so that any incidents can be reported quickly and easily. The Horse i app can be downloaded from the App Store or Google Play and incidents can also be reported via the BHS website.

Director of Safety at The British Horse Society Alan Hiscox said, “I am delighted to see these new signs being put in place highlighting that horses are being ridden nearby. At the BHS we have worked with many local authorities to place similar signs and the reduction in incidents being reported to us in these areas is staggering.

“If drivers follow the key messages of slowing down to a maximum of 15mph, being patient, passing the horse wide and slow and driving slowly away which as detailed on the signs then the roads in Carmarthenshire will become safer for both horse and drivers.”