New 20mph Speed Limits to be Introduced in Newport 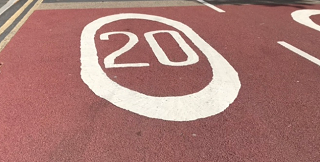 The new speed limits will be introduced into streets across the following six wards:

It is hoped that, as well as increasing safety, the new speed limits will encourage more people to feel confident choosing sustainable travel options such as walking and cycling, which the council is also promoting through its active travel schemes.

"From reduced collisions to increased opportunities for walking and cycling, the evidence of the benefits of lowering speed limits to 20mph in residential streets is clear.

“I’m pleased therefore that the new limits we are introducing will improve safety in over 300 streets across the city and that thousands of residents will benefit from improvements to their communities in the form of slower, quieter, calmer streets.”

Work to begin bringing the new limits into force has started and residents are urged to keep an eye out for the new speed limit signs going up in their area. Existing speed limits will remain in place in each ward until the Traffic Regulation Order process completes and all the new signs have been installed. The council will keep residents updated as to when this work has been completed.