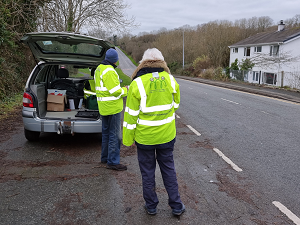 Monitoring locations are chosen by the volunteers who are then trained in the use of hand-held speed monitoring devices to record the speed of motorists driving through their village or parish.

Operating at the roadside in 20, 30 or 40mph zones, volunteers monitor the speeds of passing vehicles using portable or tripod mounted speed indicator devices. Some devices signal their speed to the drivers, others don’t. The volunteers record the speed and details of vehicles travelling above the speed thresholds. The registered keepers of vehicles observed exceeding these limits are then sent warning letters by the Police.

Further action, such as speed enforcement by Neighbourhood Policing Teams, Roads Policing or GoSafe could then be taken directly as a response to roadside observations made by CSW volunteers, especially observations of excessive speed.

Each community involved in Community Speed Watch will receive a full package of services, as part of a rolling programme during the year, as well as regular support from the North Wales Police GoSafe team:

This is a voluntary role, so volunteers won’t be paid or be able to claim expenses. After completing the application form, all CSW volunteers will be subject to a police check via Police National Computer and North Wales Police systems.

For any enquiries about the role or for a copy of the application form, you can email csw@northwales.police.uk or contact by post: