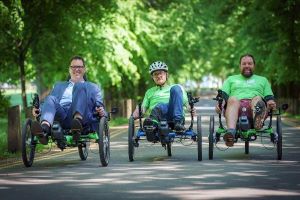 Getting people out of cars and on to bikes is the aim of a £50 million investment announced by Deputy Climate Change Minister Lee Waters.

Speaking on a visit to Cardiff-based cycling charity Pedal Power, the Deputy Minister said the money would fund cycling routes and new facilities right across Wales.

Deputy Minister for Climate Change, with a responsibility for Transport, Lee Waters said, This is a substantial investment and part of our commitment to making cycling easier so people cut the amount of journeys they take by car and travel in a way that is better for our planet.

"Getting people out of cars for short journeys and encouraging them to walk or cycle instead is a huge challenge for us, but one that has to be met if we are to reach our net zero carbon emission target by 2050.

One organisation that is benefiting from this investment is Pedal Power in South Wales.

As part of a series of Welsh Government e-bike pilot schemes, the cycling charity received £0.21 million for its ‘See Cycling Differently’ project, which is aimed at increasing the inclusivity of cycling by offering a range of e-cycles.

Thanks to the money received the charity has expanded its e-cycle fleet and is encouraging its users to cycle more.

Director of Pedal Power, Cardiff, Sian Donovan said, "Cycling is a fantastic way for everyone – all ages and abilities - to have fun, gain more independence and enjoy a sense of freedom which we know has provided a lifeline to many during the pandemic.

"We were delighted to receive funding from the Welsh Government to help us to continue to remove barriers to cycling so that it can be truly accessible and inclusive for all."

As part of the investment announced by the Deputy Minister, all local authorities will receive a minimum of £500,000 with additional allocations having been awarded based on the outcome of a competitive application process.